Beyoncé , Bought A Church, Raise Voices Of Women Of Colour

The traditional marriage that took place in Lagos on the 7th of October, 2017 at the bride’s father’s residence in Good Will Estate, Ojodu Lagos, has turned out to be the sweetest and most memorable in the life of the Bride, Folake. With both parents and members of families present. The beautiful couple Folake and Ike got engaged in a Yoruba traditional marriage style.

The traditional engagement brought both families together; the bride’s family from Ibadan whom live in Lagos, Nigeria and the groom’s family from Obuluku, Delta State, Nigeria but reside in England and thoroughly demonstrated to all the Yoruba marriage rites. Guests from United Kingdom and beyond had the opportunity to savour cultural offerings, with touching folk’s songs to serenade the special occasion. As Yoruba tradition dictates, before the arrival of the couple, the two parents and families were seated separately facing each other, whilst the host of the day who anchored the entire ceremony reeled out folksongs. Speaking in Yoruba and translates immediately in English, told the story of the descendants of the OWOADES’ and the IJEHS’. 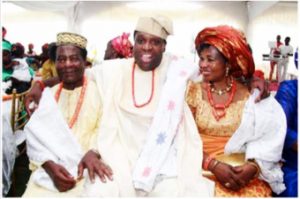 The groom’s train was clad in full traditional attire, whilst Ike was dressed in an ash agbada woven with aso-oke. They were asked to dance their way into the well decorated spacious living room as the beat of traditional drums accompanied them. The groom’s family were welcomed and reminded of their reason for coming, likening the relationship to that of a man seeing a flower he likes in a garden. After this, a request for money was made to deliver the groom’s message (as tradition demands) and then the groom’s family members contributed into a bowl that was taken around amidst drumming and joyful singing.

A marriage proposal was presented to the bride’s family and was duly accepted amidst the wondrous music and scenes of happiness. The content of the letter was then read out by the host ceremony of the day. The groom was asked to take off his cap and take center stage with his friends and family who danced their way forward. At some point the groom and friends were made to lie on the floor while both parents offered joint prayers for them. While Ike and friends were still prostrating for the Owoade’s family, voices started coming from behind, it’s the bridal train: the reason for the event.

Folake Owoade and friends took over the center stage, the singing and dancing was a beautiful sight, yet still incomparable to radiant smile exuding from bride’s face, today was her day. Her face was covered with a white veil but the photographers were determined in their quest to catch a glimpse of the angelic bride.

The ritual of introduction finally came to an end and the Owoade family handed over the bride to the Ijeh family. The impressive list of dignitaries that attended the traditional marriage ceremony fortifies the magnitude of this magnanimous occasion. Needless to say the reception subsequently followed.