The Birth of Celebration 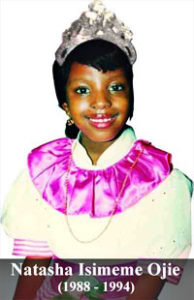 Since Natasha went to the lord, my family and I, have become passionate campaigners for cancer awareness and have institutionalized a beauty pageant Miss Nigeria UK, as a platform for its campaign and to fulfill her dream of being a beauty queen. Many people may not appreciate the harrowing experience that cancer sufferers have gone through but we know because we have been there. Our thoughts are with you all and we wish you all the best things life can provide including holistic good health, devoid of cancer.
A cancer diagnosis doesn’t necessarily mean an end to life or that one would die. There are different types of cancer and possible treatments for them but most importantly early detection gives a patient a better chance of survival. Let us all be cancer aware. I thought Cancer was something that happened to older people until doctors broke the news of my daughter’s diagnosis to us. I was on a business trip in Johannesburg, South Africa, when one morning as I was getting ready for a meeting in my hotel suite, the telephone rang. It was my wife, there was no greeting; just, “Marthins where are you, come straight home now your daughter is ill. That was the beginning of our war with cancer.

Cancer is not a respecter of any person irrespective of your race or creed, or whatever you are, rich or poor. People have asked me, ‘Why don’t you put the whole cancer thing behind you and stop talking about it?’ Well, I can’t put it behind me; also don’t want to stop talking about it because it is my promise to help put smiles on people faces especially children and women suffering with cancer. My daughter’s travail with cancer before she was snatched away by the cold hands of death actually turned my life around.
This is how it all happened. It was the 26th of February 1992, a very special day for the family. It was my birthday but how could I celebrate my birthday, as we would normally do, with my daughter in the operating theatre? I shouted and screamed ‘Oh! Our happiness has been destroyed’ I tried to catch my breath and find words to express my grief but something took over. I found myself on automatic pilot thinking positively about serious illness (Alien) that has crept into our lives wanting to destroy us. I decided not to do anything nasty like suicide, which was on my mind at the time because my daughter needed me more. I had to be her strength, her health and her healing. I wished this had happened to me and not my angelic innocent Natasha.
This publication ‘’SOCIETY CELEBRATION’’ owes its existence to the dream of a remarkable little girl – Natasha Isimeme Ojie (1988 – 1994). Natasha’s brief life touched our hearts and impacted our lives forever.
Natasha was diagnosed with a brain tumour when she was only four years old. For one and a half years she went through several surgical operations and suffered the terrible after effects of chemotherapy. Amidst all this, she showed unbelievable bravery, not permitting this tragically terminal illness to deter her. Natasha put on a disarming smile, went to school as usual and never looked ill.
At the Great Ormond Street Hospital where her condition was being managed, the staff contacted the starlight Foundation, a charity that supports the terminally ill. Starlight Foundation sought to make Natasha’s final wishes come true. Her demands were simple – to meet Cilia Black and visit Disneyland. To her greatest delight, her wishes were granted.
While Natasha’s sister & brother sought to buy toys and other trivia at Disneyland, Natasha curiously bought herself a single item, which turned out to be a symbolic cornerstone for the Miss Nigeria UK beauty pageant. She bought a crown and said daddy, I am a queen, as she put it on.
Sadly, four days after her return from Euro Disney, she fell desperately ill and it was discovered that the tumour had spread to cover Natasha’s entire brain.
Now bed-ridden, she rose one morning to reveal that she had a spectacular dream; she was a queen, riding a white horse in a beautiful place, surrounded by people dancing and jubilating. Natasha died a few weeks later.
Indeed, we were inspired by our little girl’s courage and vision in the face of death. Natasha left us with a legacy of a sense of triumph over life’s taxing circumstances and over inevitable death. It slowly became clear that the only way to keep Natasha’s memory alive forever was to build a project around her dream of becoming a queen, hence the concept of Miss Nigeria UK and Society Celebration Magazine.