The Westminster Cathedral is one of the busiest  churches in the United Kingdom and it is the moth- er-church of England & Wales, a sacred space at the  heart of a great city.

The cathedral garners attention and adoration from all over the world. The church boasts a respectable seven masses each day, of which great services of worship on special occasions and unique gatherings regularly attribute to  reaching the Cathedral’s maximum capacity. It is because of its monumental status in society that Mrs. Bernadette Ijeh, chose to celebrate the solemnisation of holy matrimony of her son, Ike and daughter in-law, Folake. 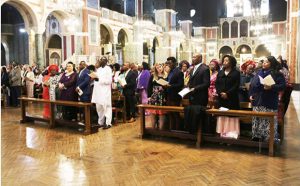 On Saturday July 11th 2018, the city of Westminster witnessed an unprecedented crowd of guests headed towards the Westminister Catheral to witness the Holy Matrimony between Folake and Ike.

The wedding was officiated by Reverend Father Cannon Christopher Tuckwell and Reverend Father Michael, began with a professional hymn; heralding an ambience catering to the beautiful ceremony, marking the beginning of the young couple’s journey. In the exhortation, Reverend Father Tuckwell read a passage from the scriptures which says ‘Marriage is a gift from God in creation and a means of HIS grace, a holy mystery in which a man and woman become one flesh’. He reminded the congregation that it is God’s purpose that husband and wife should give themselves to each other in love throughout their lives. ‘They should be united as Christ is united with HIS church’. Reverend Father Michael, advised the couple to be honest to each other in anything they do. 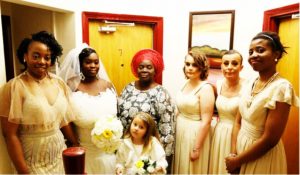 Akin to the crescendo in a piece of mu- sic, the wedding service came to its peak when the couple was ushered to the altar to profess their love and commitment to each other. The officiating priests blessed the rings, and the couple exchanged their marital vows; the religious rites culminat- ed into a prayer session with the congre- gation joining in prayers and thanksgiv- ing to God for a fruitful married life of the couple. After the signing of the marriage register which attracted wild jubilation, the couple was blessed by Reverend Fa- thers, this had indicated the closing of the church service. 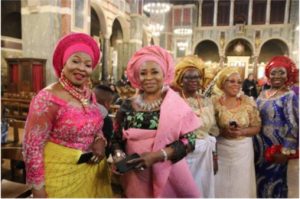