The Mascot of LEADERSHIP 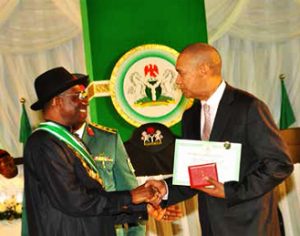 A former notice from Dr Tunde Adejumo, Director (Special Duties Office) of the Secretary to the Government of the Federation, gave concise information about the schedules of the Awards. The Investiture was held in the morning hour at the International Conference Centre, Abuja. Obviously for security sake, all Award Recipients were each entitled to enter the venue with two guests only. To ease transport problems, shuttle bus services were presented to all Award Recipients, Guests and invited Government Officials from the Eagle Square to the International Conference Centre. 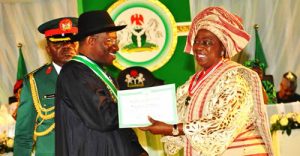 Attendance was strictly by invitation. Accreditation of all Award Recipients and the Media officers took place three days earlier, at Agura Hotel, Abuja. President Jonathan had been severally commended from different circles from within and around the world for giving the 2014 version of the awards the best in Nigeria’s history. For the fort time since its inception, the lowly of the society like taxi drivers, traffic warden, housemaids etc. were awarded in the annual event. He also directed the Minister of the Federal Capital Territory (FCT), Senator. Bala Mohammed to give a flat each to a taxi driver, Umeh Usuah; Head Presidential Steward, Onuh Isaac Michael and a traffic warden, Corporal Solomon Dauda, who were also awarded national honours.

While Michael and Dauda were conferred with the Member of Order of the Niger (MON) award, Usuah received the award of Member of the Order of the Federal Republic (MFR). Michael, the Head Presidential Steward has served nine Presidents, while Dauda had been dedicated to his job as traffic warden. Specifically, Usuah the taxi driver was given the award for his honesty in returning N18 million cash left in his cab by a passenger. 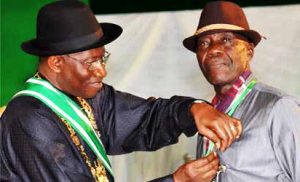 Justifying the award and reward for some of the awardees, President Jonathan said: “Take Mr. Ime Usuah, the taxi driver, whose daily income was not more than ten thousand naira, a passenger forgot eighteen million naira in his taxi, and went away. The man did not have Mr. Usuah’s name or his phone number. The honest Nigerian spirit in Mr. Usuah led him to go hunting for the owner of the eighteen million naira and he delivered it to him, intact. This is how it should be” “For many of you in Abuja or who visit our nation’s capital, you must have seen a hard-working traffic warden who does his job with great dexterity, glee and happiness. As a traffic officer, he delights in entertaining commuters by graceful gyrations and gesticulations as he efficiently directs traffic. CPL Solomon Dauda carries on his job with evident pride and dignity!