Tribute – Realisation Of A Little Girl’s Dream; The Birth Of Miss Nigeria Uk

The potents of life are colourful; sometimes its dynamics are swift, bright and delicate. Some are born into this beautiful world with heavens awaits them, while others wait on destiny to get the best out of squeeze. So when Chief (Dr) Ach Mike Onolememen’s dreams married his fortunes and consonance in his professional discipline, life for the young man blazed in glory. Little by little he began to molding a scepter of a crown, a short step that spawned a circle of event that is fast making him champion.

He was born over five decades ago into love, he had a wonderful parentage, even though he was never fed with a golden spoon, and he had a humble beginning, and grew up in a polygamous family who knew the meaning of love. He would always give kudos and thanks to his parents Mr and Mrs Augustine Aizehiwele Onolememen who brought him up and taught him how to be industrious, through him he leant the ropes of hard work as well as the satisfaction that comes with it. To him, every task had a purpose and every challenge a learning point. So, at a very tender age, he knew what it meant to set targets and achieve results.

He went to the best schools, and was fortunate to have benefited from the robust educational system that flourished in Nigeria then, he was educated severally through the 70s and 80s at St Anthony Primary School (now Opujie Primary School) Uromi; Annunciation Catholic College (ACC) Irrua; Kings College, Lagos; Bendel State University (now Ambrose Alli University), Ekpoma; University of Nnsukka; and the University of Lagos, Akoka, Lagos.

He went through the mills of quality as an architect, and bags Bachelor of science (B. Sc) Honours (second class upper) in Architecture and another Master’s of Science (M. Sc) in Construction management and registered by the Architects Registration Council of Nigeria (A.R.C.O.N) Arc. Onolememen is a full member of the Nigerian Institute of Architects and Walden University MN, USA. He has a Master’s Degree in Architecture, M. Sc in Construction Management and PhD in Public Policy Administration.

Haven’t drank from upper professional well spring of knowledge and saw the need to set up a world class architectural design outfit called ‘Gomic Consortium International Limited (a firm of architects, engineers and projects managers with offices in Lagos, Port Harcourt and Abuja) Architect Onolememen seats as the Chairman Chief Executive and a chartered architect and development consultant.

To firm up the professional background, he had to cut his technical teeth, by varied working experience at both the private and public sectors of the national economy and in the year 2000, Chief (Dr) Arc. Mike Onolememen was appointed a member of the interim Management committee of the Petroleum Trust Fund by the President, Commander in chief of the Federal Republic of Nigeria, where he doubled as Executive Director, projects Management- that placed him in charge managing key PTF projects in all the nooks and crannies of the Federation. He served as a minister of State in the ministry of Defense and also the past minister of works, of the federal Republic of Nigeria.

Chief (Dr) Arc. Mike Oziegbe Onolememen led the negotiation at the joint Ministerial Council of Nigeria Sao Tome Joint Development Authority (JDA) for the establishment of bilateral military commission (BMC) to ensure the protection of off-shore investments in the joint development zone (JDZ) of both countries.

Like the thorough professional he truly is, Mike Oziegbe Onolememen, the gracious Nigerian minister of works, has employed his expertise of a thoroughly trained ‘engineer’ and community builder to fixing over 32 major express ways, township roads and bridges across the length and breadth of the country, thus carving for himself an uncommon niche ‘as the most outstanding works minister, since Nigeria’s return to civilian government in 1999. Also, his superlative performance as the first overseer of the Nigerian road construction works is now largely regarded as a benchmark performance for the past and future works ministers in the country.

He was also a member, PDP 2011 special Convention planning committee for the election of the PDP Presidential candidate. Chief (Dr) Arc. Mike Onolememen is described as a strong work force motivator, Good team player, a leader by example, has strong transformational leadership skills, has proactive management skills and is technically strong in ICT. Overtime, his versatility, meekness and uncommon dedication to duty, has made him a role model of the sort to numerous of his countrymen and women, particularly the teeming youths. Chief (Dr) Mike Onolememen, is happily married to his heartthrob of so many years Bibian, and they have four lovely children.

In recognition of the outstanding developments to the nation and the human race, individuals, communities and States government, honoured Chief (Dr) Mike onolememen with awards and tittles across the thirty-two states of the federation. 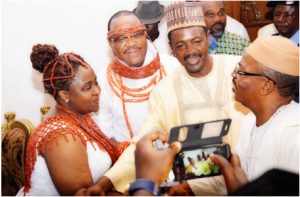 First, it was the people of Niger State that honoured him with the indigenous title of the “Builder”. later, it was the government and people of Bayelsa state that gave him the Golden Plag as a symbol of love and honorary Citizenship of the Ijaw Nation. This award was presented to him by the Governor of Bayelsa State, Hon Seriake Dickson. Also not forgotten the Honorary Citizenship of the State of Georgia, USA awarded him in June, 2015, for his excellent service to humanity. HRM Anslem Eidenojie II, the Ojuromi of Uromi, also confer on him the title, ADOLOR of Uromi Kingdom. 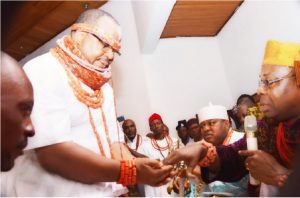 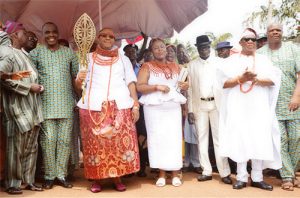 On Easter day, Monday the 28th March, 2016, the Royal Palace of the Ojuromi of Uromi Kingdopm, wore celebrating colourful look, as His Royal Majesty Zaiki Anslem Edenojie 11, MFR, Uromi chiefs in council and cross section of Esan traditional rulers honours a great son of the soil, Chief (Dr) Arc. Mike Onolememen, he was decorated the ADOLOR of Uromi Kingdom. 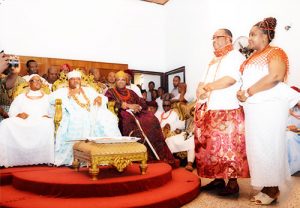 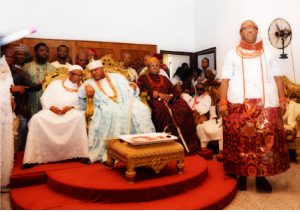 Distinguished guests present at the occasion were most vibrant members of the Federal House of Representatives, Senators, local government chairmen, ministers, it was an endless list, with members of the diplomatic corps and the international community prominently present