In Kenyan, the original home country of Barrack Obama, the cerebral and first African-American to preside over the United States of America, the world most powerful country, therein lives Lupita Amondi Nyong’o. Born March 1st 1983, Nyong’o is a diva, actress, film and music video director of dual Kenyan-Mexican citizenship, who like Obama is poised to hoisting Kenya in the global realms of literary ingenuity. 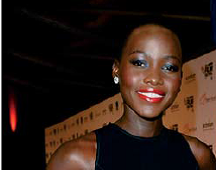 After graduating from Hampshire College with a Bachelor’s Degree in theatre studies, Nyong’o stinted as a production assistant on several films made in Hollywood, the foremost world citadel of the make-believe and films centre of the world even situated in the Obama’s America. In 2008, she made her acting debut with the short film, East River and subsequently starred in the Kenyan television series, Shuga 2009. Also in 2009, she wrote, produced and directed the documentary film, In My Genes.
Nyong’o later completed a Master’s degree in acting from the Yale School of Drama, followed  by her first featured in 2013, by a film-role in the Steve McQueen’s historical drama, 12 Years a slave. Her role in the said film was widely acclaimed, earning her the Academy Award for Best Supporting Actress, among numerous other awards and nominations.

Nyong’o was born in Mexico City, Mexico, to Dorothy and Peter Anyang’ Nyong’o, a college professor turned politician in Kenya. It is a Luo tradition to name a child after the events of the day, leading her parents to give her a Spanish name, ‘Lupita’ (a diminutive of Guadalupe). She is of Luo descent on both sides of her family, and is the second of six children. Nyong’o identifies as Mexican-Kenyan. Her father was the former Minister for Medical Services in the Kenyan government. At the time of her birth, he was a
visiting lecturer of political science at El Colegio de México, in Mexico City, where her family had been living for three years. Nyong’o briefly moved to New-York with her parents, and then back to their native Kenya, when she was less than one year old, as her father was appointed a professor at the University of Nairobi. She grew up primarily in Kenya, and describes her upbringing as “middle class, suburban”. At age sixteen, her parents sent her back to Mexico for seven months to learn Spanish. During those seven months, Nyong’o lived in Taxco, Guerrero, and took classes at the Universidad Nacional Autónoma de México’s Learning Center for Foreigners.

Nyong’o grew up in an artistic family, where family get-togethers often included performances by the children in the family and trips to see plays. She attended an all-girls school in Kenya and acted in school plays, with a minor role in Oliver Twist being her first play. At age 14, Nyong’o made  her professional acting debut as Juliet in Romeo and Juliet in a production by the Nairobi-based repertory company, Phoenix Players. While a member of the Phoenix Players, Nyong’o also performed in the plays “On The Razzle” and “There Goes The Bride”. Nyong’o mentions that the performances of Whoopi Goldberg and Oprah Winfrey in ‘The Color Purple’ was what inspired her to pursue a professional acting career. Nyong’o attended college in the United States. After graduating from Hampshire College with a degree in film and theatre studies, she worked as part of the production crew for many films , including The Constant Gardener with Ralph Fiennes, Mira Nair’s The Namesake and Salvatore Stabile’s Where God Left His Shoes. She returned to Kenya in 2008 and starred in the Kenyan television series Shuga, an MTV Base Africa/UNICEF drama about HIV/AIDS prevention. In 2009, she wrote, directed, and produced the documentary In My Genes, about the treatment of Kenya’s albino population, which played at several film festivals and won first prize at the 2008 Five College Film Festival. Nyong’o also directed the music video The Little Things You Do, by Wahu, featuring Bobi Wine, which was nominated for the Best Video Award at the MTV Africa Music Awards 2009.
She subsequently enrolled for a master’s degree in acting at the Yale School of Drama. At Yale she appeared in many stage productions, including Gertrude Stein’sDoctor Faustus Lights the Lights, Chekhov’s Uncle Vanya, and William Shakespeare’s The Taming of the Shrew and The Winter’s Tale. While at Yale, she was the recipient of the Herschel Williams Prize “awarded to acting students with outstanding ability” during the 2011–12 academic years.

Nyong’o landed her breakthrough role [20] when she was casted for Steve McQueen’s historical drama, 12 Years a Slave (2013) immediately before graduating from Yale with an MFA in 2012.[10][13] The film which met with wide critical acclaim, tells the real-life story of Solomon Northup (played by Chiwitel Ejiofor), a free born African- American man who is sold into slavery in 1841. Nyong’o played the role of Patsey, a slave who works alongside Northup at a cotton plantation; her performance met with rave reviews.[21] Ian Freer of Empire wrote that she “gives one of the most committed big-screen debuts imaginable” and critic Peter Travers added that she “is a spectacular young actress who imbues Patsey with grit and radiant grace”. Nyong’o was nominated for several awards including a Golden Globe Award for Best Supporting Actress and two Screen Actors Guild Awards including Best Supporting Actress, which she won. She was also awarded the Academy Award for Best Supporting Actress, becoming the sixth black actress to win the award, the first African Actress to win that award, the first Mexican Actress to win the award , and the first Kenyan to win an Oscar. She also became the fifteenth actress to win an Oscar for their debut performance in a featured film.

Nyong’o currently resides in Brooklyn, USA. She is fluent in her native Luo, English, Swahili and  Spanish. On February 27, 2014, at the Essence Black Women In Hollywood luncheon in Beverly Hills, she gave a speech on the beauty of black and talked about the insecurities she had about herself as a teenager. She said her views about herself changed when she saw South Sudanese supermodel Alek Wek become successful.
In 2013, her father was elected to represent Kisumu County in the Kenyan Senate. Nyong’o’s mother is currently the managing director of the Africa Cancer Foundation and her own communications company. Other family members include Tavia Nyong’o, who is a scholar and professor at New York University,
Dr. Omondi Nyong’o, who is a pediatric ophthalmologist in Palo Alto, Carlifornia, USA, Kwame Nyong’o, who is one of Kenya’s leading animators and leading technology expert; Isis Nyong’o, named one of Africa’s most powerful women by Forbes magazine.
The father of Oscar winner, Lupita Nyong’o, has revealed how the 12 Years A Slave actress’s family suffered real brutality and torture in Kenya. Miss Nyong’o won both awards and critical praise for her performance as Patsey in director Steve McQueen’s harrowing film, in which her character appeared in some of the most shocking scenes, but her own family were also the victims of harassment, violence and even murder.
As an opponent of former Kenyan President Daniel Arap Moi, the actress’s father, Peter Anyang Nyong’o, was tortured repeatedly, while her uncle Charles Nyong’o’s body was never found after he was attacked on board a ferry and hurled off the ship. Peter Nyong’o, now a leading Kenyan politician who serves on the country’s Senate, has now revealed the true extent of family’s brutal treatment, which made them to flee to Mexico. He also narrated how he had struggled to watch his daughter’s acting triumph, but added that his own experiences pale in comparison to Solomon Northup, played in the historical drama by British actor, Chiwetel Ejiofor. The erudite Mr. Nyong’o, Secretary-General of Kenya’s Orange Democratic Movement and a former Kenyan Minister for Medical Services since 2008, said he believes his brother was attacked because of his own opposition to Moi’s rule. As a young girl Lupita and her five brothers and  sisters had to move with their parents from place to place, with her father often taken into police custody on a weekly basis, while the rest of the family were the victims of threatening phone calls.
Mr. Nyong’o said he thought that his daughter’s insecure upbringing and constant need to adapt to new surroundings may have helped her to take on some of the transformative skills needed to become an actor. Both Mr. Nyong’o and his wife travelled from Kenya to attend the Oscars ceremony where his daughter took home the Best Supporting Actress award, and he described her performance in 12 Years A Slave as ‘tremendous