HE ONCE RAPPED, “I’M NOT A BUSINESSMAN, I’M A BUSINESS, MAN.” TURNS OUT HE WAS RIGHT.

Shawn Carter, better known as Jay-Z, celebrates his 50th. He is declared by Forbes, as one of the wealthiest musicians in the world, with an estimated net worth of $1 billion.

But the rapper came from humble beginnings, growing up poor in the Marcy housing project in Brooklyn, New York City.

“The burden of poverty isn’t just that you don’t always have the things you need,” Jay-Z told NPR in 2010. “It’s the feeling of being embarrassed every day of your life, and you’d do anything to lift that burden.”

Drugs and violence surrounded Jay-Z during his turbulent youth. The rapper has detailed his years as a drug dealer in numerous songs and interviews.

Jay-Z turned to a career in hip-hop at an early age. In 1989, at the age of 19, he appeared on MTV’s “Yo! MTV Raps” … … and by 1990 he was rapping on songs by his mentor, Jaz-O. Unable to find a major record-label deal, Jay-Z founded Roc-A-Fella Records in 1995 with friends Damon Dash and Kareem Burke. Jay-Z’s debut album “Reasonable Doubt” a year later turned the rapper into a rising star.

Jay-Z released several chart-topping albums in the late 1990s and early 2000s, turning him into an international superstar and earning him millions of dollars.

But music is far from Jay-Z’s only source of income. In 1999, he cofounded the clothing retailer Roca wear, which was sold in 2007 for $204 million. Jay-Z dipped his feet in the world of sports business in 2003 when he bought a small percentage of the New Jersey Nets. He had an outsize influence on the NBA team and pushed to revamp its branding upon its move to Brooklyn in 2012. He sold his portion of the team the next year.

In 2015, Jay-Z bought the company behind Tidal, a music-streaming service, for $56 million. Today, Tidal is worth about $600 million. Although his music has been noticeably absent from other streaming services since, his discography reappeared on Spotify once the clock struck midnight on his 50th birthday.

Jay-Z rakes in even more money from Armand de Brignac, the brand of champagne he bought in 2014. He’s also the partial owner of D’Usse, a cognac made by Bacardi.

Jay-Z’s entertainment label, Roc Nation, is owned by Live Nation. It launched a sports-management division called Roc Nation Sports in 2013. Roc Nation announced a partnership with the NFL in August 2019 that will introduce new music and entertainment initiatives to football games. Some proceeds will also go to the NFL’s social justice initiative — sparking criticism because of Colin Kaepernick’s exclusion from the deal.

He’s also an investor in Jet Smarter, a start up that allows people to rent private jets like they would an Uber or Lyft.

And he’s the owner of the 40/40 Club, an upscale sports bar and nightclub in Manhattan.

Jay-Z’s success has transformed him into a brand unto himself. His lyrics often allude to his brand, like in 2005, when he rapped, “I’m not a businessman, I’m a business, man.”

Meanwhile, his relationship with Beyoncé Knowles has cemented the couple at the center of the music world. The pair began dating in the early 2000s and married in 2008. 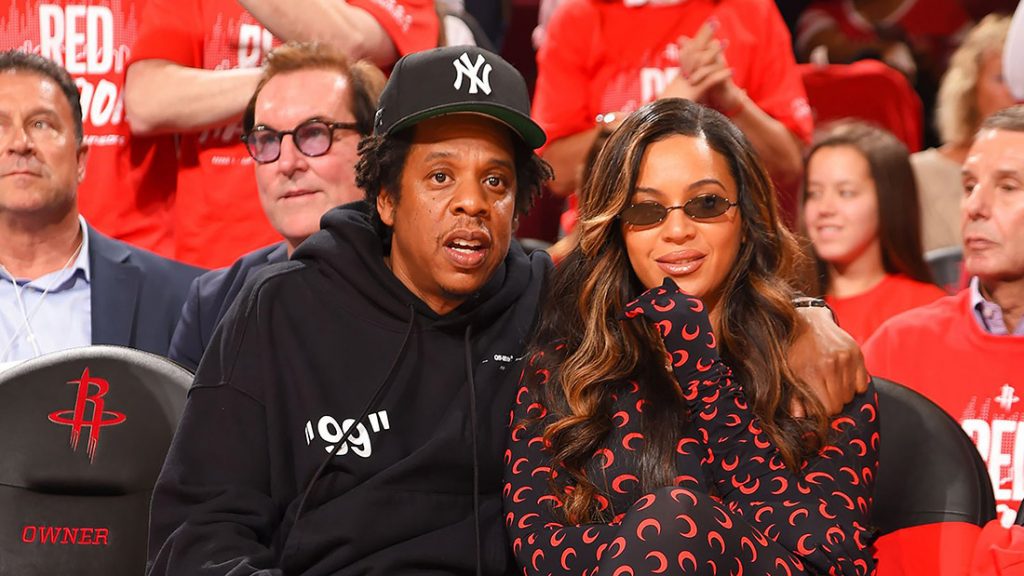 A decade later, the couple has a combined net worth of more than $1.3 billion, with no signs of slowing down. In 2017, Jay-Z signed a $200 million, 10-year deal with concert conglomerate Live Nation Entertainment.

And last year, he and Beyoncé played 48 shows on their “On the Run II” tour, which earned them a reported $5 million a show.

They have three children together, and they aren’t afraid of spoiling them: For daughter Blue Ivy’s first birthday, they reportedly gave her a diamond-encrusted Barbie doll worth $80,000, and in 2016 they spent $11,000 on her dress for the MTV Video Music Awards.

And they reportedly spent more than $80,000 on matching gold cribs for their twins, Rumi and Sir, born in 2017.

Despite his forays into the business world, Jay-Z isn’t done making music. In 2017 he released his 13th studio album, “4:44,” to widespread acclaim.

In one memorable lyric from the album, Jay-Z laments wasting money on cars earlier in his career instead of investing in real estate in his native Brooklyn, where property values are skyrocketing: “I bought every V12 engine, wish I could take it back to the beginning’, I could have bought a place in Dumbo before it was Dumbo for like 2 million. That same building today is worth 25 million. Guess how I’m feeling’? Dumbo.”

In the same song, he brags about another successful investment: He’s purchased numerous works of art that have since increased in value, like the $4.5 million painting by Jean-Michel Basquiat he bought in 2013.

Nearly 30 years after he burst onto the scene, Jay-Z has managed to translate his success in the music world over to the business world.

Jay-Z is officially hip hop’s first billionaire, Forbes has declared, after building an empire based on music, property, fashion and investments.

Beyoncé Celebrates With Her Mom at Tina Knowles’ Surprise Party