A LEAF OF WISDOM

The wedding of Folake and Ike gained much attention from industry leading names as well top professionals from other pursuits. 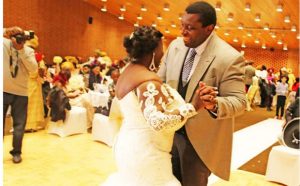 The Ijehs and Owoade families stood proud as parents of their daughter and son tied the nuptial knot. Mr and Mrs Ijeh brought distinguished dignitaries, business icons, cooperate personnel, friends and well-wishers together for the special occasion and it goes without contestation that the Kensington Town Hall remains an exceptional venue of choice, suitable for that exact event.

The atmosphere at the reception was effervescent, the town hall had been enveloped with exuberance and jubilation. Eyes of many dignitaries twinkled, faces of many guests exuded utter joy, it truly was a scene befitting to such a wonderful occasion. Some would say the happiness that flooded through the room was in conjunction with the bespoke and well-decorated tables, laced in regal décor and tabling refined spirits and beverages. But we would like to assume that the ambience was a resultant of Folake and Ike’s love.

The arrival of the Bride and Groom immediately taxied off the ceremony with the opening prayers. A renowned Master of Ceremony, Mrs Tessy Olaniregun and two other good friends of the groom Mark Matt and Terry anchored the occasion. The event was tipped off with a hint of humour; touches of class and finesse, and of course all dignitaries were duly recognised.

The ceremony blazed with colourful music, there were lots of jokes to spice the occasion. The hosts sent guest cracking their ribs as they feasted on the rich continental buffet and exotic cocktails.

DJ Paul, electrified the occasion with the latest Afro beats hits, which threw the entire audience both young and old onto the

dance floor. Hits were played, much to the the delight of guests of all ages. The couple’s dance was beautiful sight, befitting of the day, however it was the Bride, Folake and her father, Mr Owoade’s dance that took many people’s hearts. The bond that exists between a father and his daughter is something no one can severe and it was a serene display of true love.