Theresa May was the home secretary under Prime Minister David Cameron. May, accepted an invitation from Queen Elizabeth II to form a new government just minutes after David Cameron, the outgoing prime minister, tendered his resignation to the 90-year-old. Queen endorsed Theresa May, a Conservative politician, as the Britain’s second female prime minister after Margaret Thatcher, and the second longest serving home office secretary in the past 100 years. 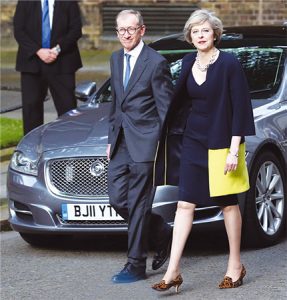 The 59-year-old formal home secretary’s carefully cultivated image of political dependability and unflappability appears to have made her the right person at the right time as the fallout from the UK’s vote to leave the EU smashed possible rivals out of contention. Long known to have nurtured leadership hopes, Mrs May – whose friends recall her early ambition to be the UK’s first female PM – could have reasonably expected to have had to wait until at least 2018 to have a shot at Downing Street. But the EU referendum which David Cameron called and lost, the year after leading the party to its first election win in 23 years – turned political certainties on their head and, as other candidates fell by the wayside after the Prime Minister’s own resignation, Mrs May emerged as the “unity” candidate that succeeded him.

Theresa May has insisted “Brexit means Brexit” and there will be no second referendum on the issue. She says official talks on leaving, which will begin when the UK triggers the so-called Article 50, won’t begin until the end of 2016 at the earliest. She has insisted the status of EU nationals in the UK won’t change until a new “legal agreement” is reached but has yet to give a guarantee on their status. She says the best deal is needed to trade with the EU in goods and services but more control is needed to lower immigration.

Who is Theresa May?

Daughter of a Church of England Vicar, Hubert. Born in Sussex but raised and spent most of her growing up in Oxfordshire, and attended a state primary school, an independent convent school and then a grammar school in the village of Wheatley, which became the Wheatley Park Comprehensive School during her time then. Theresa in her early days took part in a pantomime that was produced by her father and worked in the bakery on Saturdays to earn little pocket money.

In her third year, she met her husband Philip, who was president of the Oxford Union, a well-known breeding ground for future political leaders. The story has it that they were introduced at a Conservative Association disco by the subsequent Pakistani Prime Minister Benazir Bhutto. They married in 1980.

Her university friend Pat Frankland, once said: “I cannot remember a time when Theresa May did not have political ambitions. “I well remember, at the time, that she did want to become the first woman prime minister and she was quite irritated when Margaret Thatcher got there first.” Like so many others of her generation, she went to Oxford University to study and found that her personal and political lives soon became closely interwoven. After graduating with a degree in Geography, May, went to work in the City, initially started work at the Bank of England and later rising to become head of the European Affairs Unit of the Association for Payment Clearing Services.

But it was already clear that she saw her future in politics. She was elected as a local councilor in Merton, south London, and served her ward for a decade, rising to become deputy leader. However, she was soon setting her sights even higher. Mrs May, who has become a confidante as well as role model for aspiring female MPs – told prospective candidates before the 2015 election that “there is always a seat out there with your name written on it”.

In her case – like that of Margaret Thatcher – it took a bit of time for her to find hers. She first dipped her toe in the water in 1992, where she stood in the safe Labour seat of North West Durham, coming a distant second to Hilary Armstrong, who went on to become Labour’s chief whip in the Blair government.

Her fellow candidates in that contest also included a very youthful Tim Farron, who is now Lib Dem leader. Two years later, she stood in Barking, east London, in a by-election where – with the Conservative government at the height of its unpopularity – she got fewer than 2,000 votes and saw her vote share dip more than 20%. But her luck was about to change.

The Conservatives’ electoral fortunes may have hit a nadir in 1997, when Tony Blair came to power in a Labour landslide, but there was a silver lining for the party and for the aspiring politician when she won the seat of Maidenhead in Berkshire. It’s a seat she has held ever since. An early advocate of Conservative “modernisation” in the wilderness years that followed, Mrs May quickly joined the shadow cabinet in 1999 under William Hague as shadow education secretary and in 2002 she became the party’s first female chairman under Iain Duncan Smith. She then held a range of senior posts under Michael Howard but was conspicuously not part of the “Notting Hill set” which grabbed control of the party after its third successive defeat in 2005 and laid David Cameron and George Osborne’s path to power.

This was perhaps reflected in the fact that she was initially given the rather underwhelming job of shadow leader of the House of Commons. But she gradually raised her standing and by 2009 had become shadow work and pensions secretary. Nevertheless, her promotion to the job of home secretary when the Conservatives joined with the Lib Dems to form the first coalition government in 70 years was still something of a surprise – given that Chris Grayling had been shadowing the brief in opposition.

While the Home Office turned out to be the political graveyard of many a secretary of state in previous decades, Mrs May refused to let this happen – mastering her brief with what was said to be a microscopic attention to detail and no little willingness to enter into battles with fellow ministers only when she thought it necessary. Hear what fellow cabinet members had to say; After one “difficult” meeting with Mr Clegg, he reportedly told David Laws: “You know, I’ve grown to rather like Theresa May… ‘She’s a bit of an Ice Maiden and has no small talk whatsoever – none. I have quite difficult meetings with her. Cameron once said, ‘She’s exactly like that with me too!’ “She is instinctively secretive and very rigid, but you can be tough with her and she’ll go away and think it all through again.”

Even before entering Downing Street, she made history by becoming the second longest serving home secretary in the past 100 years. On the plus side crime levels fell, the UK avoided a mass terrorist attack and in 2013, she successfully deported radical cleric Abu Qatada – something she lists as one of her proudest achievements, along with preventing the extradition to America of computer hacker Gary McKinnon.

She was not afraid to take on vested interests, stunning the annual conference of the Police Federation in 2014 by telling them corruption problems were not just limited to “a few bad apples” and threatening to end the federation’s automatic right to enroll officers as its members. Labour MP Yvette Cooper, who went up against her in the Commons as shadow home secretary, told The Guardian: “I respect her style – it is steady and serious. She is authoritative in parliament – superficial attacks on her bounce off.

There was a bitter public row with cabinet colleague Michael Gove over the best way to combat Islamist extremism, which ended with Mr Gove having to apologised to the prime minister and Mrs May having to sack a long-serving special adviser – a turf war which is said to have led to a diminution in her admiration for the prime minister.

One of Westminster’s shrewdest as well as toughest operators, Mrs May’s decision to campaign for the UK to remain in the EU but to do so in an understated way and to frame her argument in relatively narrow security terms reaped dividends after the divisive campaign. During what turned out to be a short-lived leadership campaign, Mrs May played strongly on her weight of experience, judgement and reliability in a time of crisis. While her wider political appeal is, as yet, untested, Mrs May will not have to face a general election until May 2020 unless she decides to seek a fresh mandate – something she has seemingly ruled out.

While the early years of Mrs May’s time in Downing Street may be dominated by the process of divorcing the UK from the EU and the deal she will be able to strike, she has also insisted she won’t be content with the “safe pair of hands” tag that is often attached to her. Brexit, she has said, won’t be allowed purely to define her time in office and she has promised a radical programme of social reform, underpinned by values of One Nation Toryism, to promote social mobility and opportunity for the more disadvantaged in society. But with a slender parliamentary majority of 17 and a nation still riven by divisions over the EU referendum and anxiety over the future, she will face as tough a task, some say even tougher, than any of her recent predecessors in Downing Street.

Theresa May has pledged a shake-up of boardroom ethics as part of which workers will be guaranteed representation on company boards while shareholders vote on executive pay deals will be made binding every year. 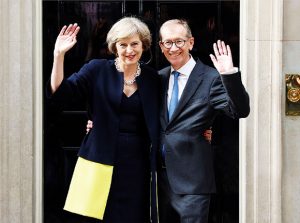 On the future of the party; “(It is) nothing less than the patriotic duty of our party to unite and to govern in the best interests of the whole country. We need a bold, new positive vision for the future of our country – a country that works not for a privileged few but for every one of us.” Says people want more than just a “Brexit PM” and has vowed to unify the Leave and Remain factions in the party.